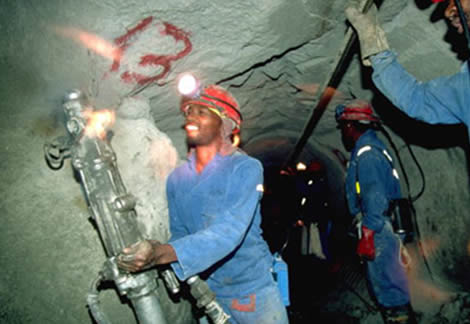 Around 1996, the mineral industry in Zimbabwe was a major contributor to the world supply of chrysotile asbestos, ferrochromium, and lithium minerals. Gold production was the leading sector in 1996 with output exceeding 24 metric tonnes.
The Minerals Marketing Corporation of Zimbabwe (MMCZ) handled most other mineral exports. Most of the country’s mineral industries were export oriented and subject to world market fluctuations.
The suspension of the granting of EPOs in 2005 crippled exploration activities, the effect of which was to slow future mineral recovery. The upshot of this suspension was a serious impact on the future of the mining industry.
As a result, all sectors of the economy faced reduced output due to power outages, huge skills flight and a shortage of foreign currency to buy raw materials and equipment. Inflation was officially at a record high of 31,000,000% as of July 2008.
Gold miners and all other exporters were in a quandary as a result of exchange rate misalignments and government imposed price controls
The RBZ had problems in terms of releasing the foreign currency to miners. As a result, miners could not freely access funds from FCAs and funding mining operations became an immense task. 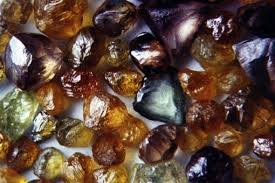 Coal miners also had their own set of challenges. The main coal miner, Hwange Colliery Limited, had a mandate to supply a big portion of its mining output to Zimbabwe Power Company (ZPC) at a price set by the government. Against an average international price of thermal coal of above US$100/tonne, ZPC paid them a local currency equivalent, which was less than US$1/tonne (at the parallel market rate). All other mining houses that had to export their mining products had similar problems. Thus, most mines ended up facing serious liquidity challenges .
Mining activities to date
To date, over 40 different minerals have been found and mining has remained an important sector in the Zimbabwean economy creating jobs, earning foreign currency and diversifying the economic base. With relative political and economic stability in the 90s, mineral exports accounted for about 45%-51% of Zimbabwe’s foreign currency earnings. In addition, mining was a direct employer of up to 60,000 people with others in support industries.
Mining activities also stimulated the development of towns such as Hwange and Kadoma and was a catalyst in the development of basic infrastructure such as road, rail and telecoms. The sector’s contribution to GDP has remained at an average of 7%.
The liberalisation measures introduced in 2009 have restored confidence in the mining sector. This has allowed previously closed mines to reopen and resume operations, particularly in gold mining. Production in the mining sector is however expected to remain subdued as some mining houses remain closed as a result of undercapitalisation.
Gold
Gold output is estimated to have increased significantly from 4,966 tonnes recorded in 2009 to 7,724 tonnes in 2010.
This is largely due to the resumption of operations by gold miners. The liberalisation of gold marketing introduced in 2009 allowed gold mines that had suspended operations to resume production. In addition, the issuance of gold dealership licences to gold buyers has resulted in mining houses securing lines of credit, critical in increasing production. As a result, Zimbabwe’s largest gold mine, Metallon Gold, which closed down its five mines, has since reopened most of them.
In addition, capital injections also allowed Mwana Africa to reopen Fredda Rebecca Mine.
Coal
Coal output is expected to have increased from 1.7 million tonnes in 2009 to around 2.4 million tonnes in 2010, as a result of the improved macroeconomic environment. Aged equipment and frequent breakdowns have had a negative impact on coal production at Hwange.
Platinum
Notwithstanding the adverse macro-economic environment in the country, platinum production has been steadily increasing from 519kgs in 2001 to around 6,849kgs in 2009. Platinum output was  at 8,712kgs in 2010 following the expansion programme by Zimplats. This sector is further expected to grow following beneficiation demands by the government
Asbestos
Asbestos output is estimated to have declined from 11,489 tonnes in 2008 to 3,316 tonnes in 2009. One of the major producers of asbestos, Associated African (AA) Mines, is heavily weighed down by old machinery, which needs constant repair and maintenance.
Base metals
Chrome and nickel production were heavily affected by the world recession. With international prices at 33% of the levels achieved in early 2008, most nickel and chrome operations have been put on hold and the equipment placed under care and maintenance. Maranatha, one of the country’s largest chrome producers is struggling to recapitalise. Similarly, Bindura Nickel Corporation is yet to resume operations at its Bindura and Shangani mines.
Diamonds
According to an Israeli diamond consultancy firm, Zimbabwe has the potential to supply 25% of the global diamond demand in terms of value within just a few years.
Zimbabwe sold its first batch of 900,000 carats of diamonds from Chiadzwa (eastern part of Zimbabwe) on 11 August 2010 and realised $72m after meeting minimum requirements under the Kimberley Process (KP) Certification Scheme. It was the first public sale of diamonds from Marange field in eastern Zimbabwe. With the country now KP certified and also benefiting from the lift on bans from the EU it is expected that Zimbabwe will conduct more sales of the gem in Antwerp and in the country as well.